The demand for electric vehicles (EVs) is clearly rising steeply. In 2021, all the net growth in global car sales came from EVs. While the growth of EVs in the coming years is undisputed, which players will emerge as winner isn’t as clear. As the industry is still evolving, investors looking to start a position should look at a company’s long-term prospects and be ready to stomach short-term volatility.

Among the new, pure-play EV companies, Rivian has attracted lots of attention from investors. Let’s discuss where Rivian (RIVN -8.56%) could reach 10 years from now.

Looking at the strong demand for electric vehicles, several EV companies have sprung up in the last few years. But Rivian has fared better than most of the other EV start-ups. To begin with, its electric vehicles have not only performed as expected in real-world conditions, but they also offer some of the best features. Rivian’s electric pickup truck has won accolades, as well as MotorTrend’s 2022 Truck of the Year award, for its design, engineering, and technology. 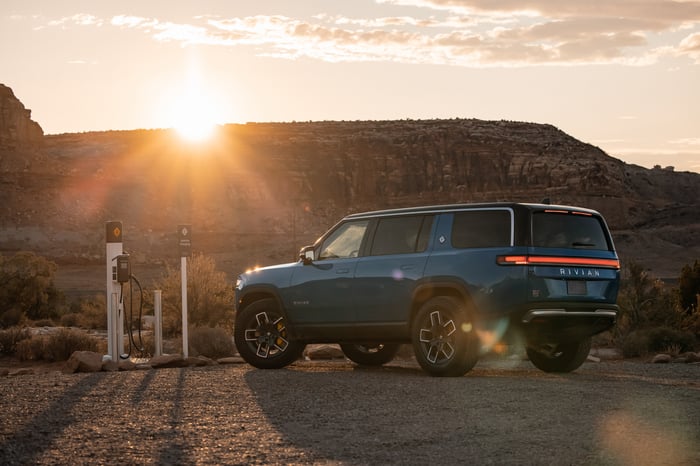 Impressive offerings attracted potential buyers to Rivian. The company boasts more than 90,000 pre-orders for its pickup truck and SUV. Importantly, the number of pre-orders has grown even after Rivian announced a price increase in March.

Additionally, Rivian has an initial order of 100,000 electric delivery vans from Amazon. Amazon had a nearly 17% stake in Rivian at the end of last year.

Rivian is also progressing fine with its production. Although supply chain issues impacted Rivian’s production targets for 2022, the company recently reaffirmed its revised target of 25,000 EVs for the year. 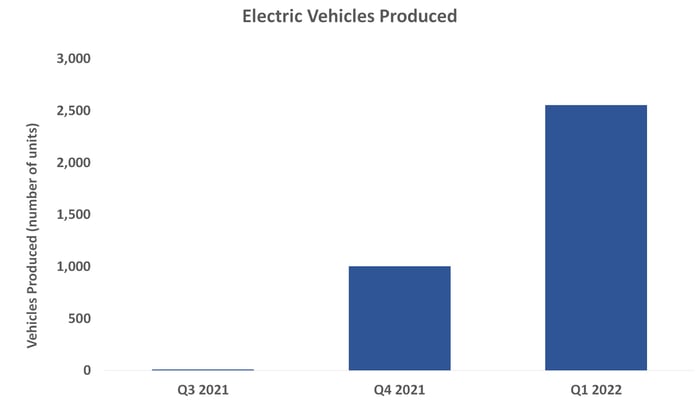 In the first quarter, Rivian produced 2,553 vehicles and delivered 1,227 of those. That’s more than double the vehicles it produced in the previous quarter.

The target of 25,000 EVs for this year is way higher than the 1,015 vehicles Rivian produced last year. Of the 25,000 units, Rivian expects around a third to be electric delivery vans for Amazon, while the remaining would be pickups and SUVs.

With very little history, an investment in Rivian is largely based on its growth prospects. Let’s assume that, starting from 25,000 in 2022, Rivian doubles its sales over the next three years — not an aggressive assumption considering it is just getting started. Further, its growth falls to 50% over the next three years after that, and to just 25% after that. Then, 10 years from now, it could be selling more than a million EVs annually.

The company is also ramping up its production. It plans an annual capacity of around 600,000 units between its Normal production facility and upcoming plant in Georgia. In the long run, Rivian aims to capture more than 10% of the global EV market share.

If Rivian grows as expected, it could be a big and profitable EV maker 10 years from now. It has entered early into the electric pickup truck segment and may succeed in capturing a chunk of this market if it ramps up quickly.

However, it is important to note that the company faces stiff competition from established automakers, including Ford and General Motors, as well as from EV maker Tesla. Moreover, Rivian is yet to become profitable. So, the above growth story faces key risks.

Is Rivian stock a buy?

With the impressive progress so far, I’m inclined to believe that the chances of Rivian’s success are more than its failure. However, I would spread my EV bets across top EV stocks rather than counting on a single stock.

Rivian stock is down roughly 75% year to date on valuation concerns as well as a correction in the broader market. So, if you are willing to take the risks associated with Rivian, now could be a great time to buy its stock.